By René Gräber, naturopath | Original article (in German) on NaturHeilt.com

Caution: This article is not for the faint-hearted. For when taking a closer look, this topic might cause a "queasy" feeling. So brace yourself...

I have been saying for years (no joking): If it is true what is said about metastases in cancer - that they are supposedly spread via the bloodstream - then all blood donations should be tested for cancerous cells, shouldn't they? Have you ever heard of that being done though? Neither have I. So: either the metastase theory is wrong, or something here isn't quite right ... Welcome to the "Horror Cabinet" of Blood Donations

Disclaimer: A lack of blood in the veins can lead to a range of ailments which can even result in death. In certain cases, such as an accident with severe injuries causing a significant blood loss, or during certain operations, the doctors in charge often feel compelled to transfuse allogeneic blood.  Decisive moments in medicine, for sure. A life has been saved, and one could heave a sigh of relief. But here once again, the devil is in the details ...

A transfusion of foreign blood, also called allogeneic blood transfusion by medical professionals, offers the possibility of transfusing more than just blood. For blood does not only contain red and white blood cells etc., it also carries everything that has entered the organism, such as viruses, bacteria, toxins and much more.

A blood coagulation medication of the Bayer company respectively their American subsidiary Cutter shows an especially tragic example which is to be described as criminal. Its coagulation factors were extracted of donated blood which partly came from HIV positive donors. The extraction process of the coagulation factors did not eliminate the viruses in the products. Despite knowing of the contamination of the products, the company sold them to Hong Kong, Taiwan, Japan and Argentina and "turned" the patients with coagulation disorders into HIV patients too.

Another point is about the misconception that there are universal donors and universal recipients for blood donations. Blood group 0 is said to be universal donor and blood group AB universal recipient. But this is not true. In addition to that, there are not only AB0 blood types but also quite a few more that almost certainly are not compatible with one's own blood. This means that each transfusion is a challenge to the immune system which recognises these incompatibilities and reacts to them.

But as it seems, these "challenges" have hardly played a role in conventional medicine for years.

In Germany, up to 5 million blood transfusions are carried out annually. Considering the fact that one bag of blood costs 100 euros and earns up to 300 euros per patient, all of that times 5 million, it is easy to determine the financial relevance of the blood trade. This turns even vampires pale with envy. To the organism though, each transfusion is a "mini-transplantation" as foreign "tissues" appear in the own organism, which has corresponding consequences. Whereas these mini-transplantations do not have the same dramatic outcome as the transplantation of a kidney, heart or liver, they can be noticed in a much more subtle way.

A defensive reaction of the immune system after an organ transplant is counterproductive and mostly fatal. The progress is often drastic and quick. A mini-transplantation (i.e. blood transfusion) however shows a much subtler course. Because in a blood transfusion with ensured blood type compatibility, there will be no dramatically striking "rejection reaction". But when taking a closer look, some peculiarities can be seen here as well.

The documentary film "Böses Blut" ("bad blood") by the German TV channel ARD shows how disastrous foreign blood can be, even without the aforementioned dramatic consequences: 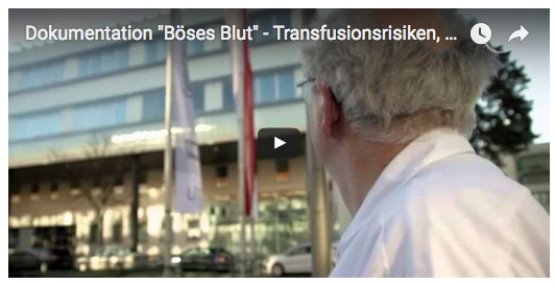 A number of studies are quoted in this documentary which I have looked into. It starts with a devastating allegation coming from the British Isles: Transfusion-related acute lung injury; clinical perspectives. – Acute complications are not very common. When occurring, the lungs are primarily affected, in particular pneumonia, pulmonary oedema etc. These lung problems present the highest percentage of mortality due to transfusion-related complications. (This study is not mentioned in the ARD documentary.)

Association between intraoperative blood transfusion and mortality and morbidity in patients undergoing noncardiac surgery. – This work shows it as well: Blood transfusions during surgery entail a higher risk of death or illness. The probability of a transfusion-related death was 29 percent higher. The probability of lung problems was 76 percent higher, for sepsis (blood poisoning) 43 percent, for thromboembolism (life-threatening blood clots in the veins) 77 percent and problems with wound healing 87 percent. 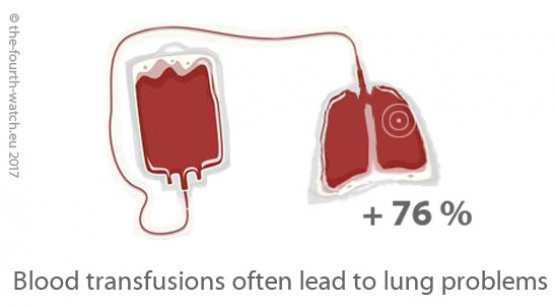 The ARD documentary quotes a meta analysis, i.e. a study that compares several studies to each other, from 2008:
Efficacy of red blood cell transfusion in the critically ill: a systematic review of the literature.

Here 42 out of 45 examined studies revealed that in a transfusion with red blood cells (no whole blood), the possible risks were higher than the expected benefits. Two studies showed no increased risk but also no increased benefit.

And only one (!) study revealed what conventional medical practitioners always claim to be the medical reality: blood transfusions are harmless and are beneficial for the patient. The Other Side of Bad Blood

So far, it appears as if we "only" have to deal with the consequences of the mini transplantations and thereby with the disrupted maintenance of the biochemical balance state in the body. The more malignant variation is yet to discover as this only comes to light many years later. Similar to Bayer's HIV-contaminated coagulation medication, there is always the possibility of transfusions being contaminated with a range of viruses and toxins too. Blood reserves are nowadays controlled and checked for e.g. hepatitis viruses and HIV. Therefore one can assume that they are safe. But you can only find what you are looking for. In other words: There is no analysis device where you pour in the blood and that tells you all kinds of unwanted substances that are present in the blood. Back when the danger of AIDS had not been recognised yet, the blood checks would even give the go-ahead if the blood reserves were HIV-contaminated.

Therefore it is not only imaginable but even very likely that cancer may be transmitted this way. Via blood transfusions, cancer becomes an "infectious" disease. For as far as I know, there is no routine check for metastasis cells in blood reserves coming from the donor. And if these cells are infused into a patient's ailing organism, chances are high that they find an ideal environment to grow; the host's immune system being too weak to fight against the "infection" of metastatic cells.

And this hypothesis appears to be entirely confirmed in the documentary.

An Israeli study in rats from 2008 (Blood transfusion promotes cancer progression: a critical role for aged erythrocytes.) showed that the transfusion of fresh and stored blood lead to a fourfold increase of cancer rates in the animals. At the same time, the mortality risk doubled. Surprisingly, it did not matter whether the blood was autologous blood, i.e. the animal's own blood, or foreign blood. A crucial factor was the storage of the blood. Fresh blood showed less anomalies than blood that had been stored over a longer period of time.

[And which blood bag is being given first in everyday hospital life? The one that is closest to the expiration date: the oldest one! This is an economically viable but medically disastrous decision.]

Common immune-related risk factors and incident non-Hodgkin lymphoma: the multiethnic cohort. – In this study concerning human population groups, the authors found that participants with a medical history of blood transfusions have an increased risk of lymphoma by 39 percent in men and 22 percent in women. The reason for this might be a weakened immune system due to the transfusion.

Blood transfusions and the subsequent risk of cancers in the U.S. elderly. – This work examined cases of 550,000 elderly patients from the USA that had been diagnosed with cancer and 100,000 healthy participants as reference group. It showed that transfusions 0 to 12 months prior to the diagnosis had doubled the cancer risk. This included stomach cancer, colon cancer, liver cancer, kidney cancer, bone-marrow cancer, lymphoma and leukaemia. There was no connection with an earlier transfusion.

Calling blood transfusions harmless and life-saving seems to depend on the situation. As we have just seen, mini transplantations are not harmless. They become life-saving if a life-threatening blood loss is given which leaves no other choice to the doctor than reverting to blood reserves. Is it true though that in Germany, 5 million blood bags are transfused per year because 5 million Germans suffer from a life-threatening blood loss? Or is it not so that no one in conventional medicine can imagine - based on evidence - that blood transfusions can be damaging and that therefore and for safety reasons, one or two more blood bags can or should be given without straining the patient. So far the misbelief.

Moreover, such additional transfusions yield more money for the hospital funds. This brings the little world of conventional medicine back in order: The patient is well provided with blood and the hospital's and supplier's account books with a some more revenue. Therefore I dare to make the prediction that the above-mentioned facts will not cause anybody to jump up shocked or outraged in order to change something. Because changes would inevitably come with a massive revenue decline, which was also hinted by some of the interviewed medical professionals in the documentary.

And so the inevitable happens: The producers of the documentary confront different institutions and authorities with the gained results. The reactions were typical and anything but surprising.

The German health insurance AOK was unwilling to comment ("we unfortunately have to pass" - why "unfortunately"?). Tremendously strange, considering how much money could be saved here. Wasn't it the health insurances that always scream for cost savings? So why make such a fuss about it?

The Association of Health Insurances has already heard about the issue, also about the patient-blood-management, where the conditions for transfusion-free respective low transfusion surgeries are determined before a patient has an operation. But the Federation is making excuses of nobody having submitted an application for it yet.

And the cancer experts have even better excuses in stock. The German Cancer Research Center in Heidelberg states that it is "not an interesting question", that "the issue should be reconsidered" and "no panic should be stirred up unnecessarily". Interesting, these Heidelberg cancer experts – there are umpteen studies conducted that show a cancer-promoting effect of blood transfusions, and in Heidelberg one goes ahead and reconsiders, does not stir up panic and is not interested in this kind of questions concerning cancer medicine. Cancer researchers that are not interested in cancer, the height of arrogance by conventional medicine which ignores actual effects and facts.

The closing words are spoken by a less ignorant doctor who sees the system's inertia and indifference as a breeding ground for patients' complaints, if the news of the damaging effects of blood transfusions has spread widely. Then, at the latest, the conventional medicine fledges. Because then again, it is all about money. If it were about health, the reactions of the health insurances, research centers and health authorities would be different.

Blood transfusions are not as harmless as they seem and as they are considered. Conventional medicine acts as always in such situations: defensively. Some medical professionals like to use stupid and highly unprofessional arguments such as: "This has always been done this way!", "all overrated", "scaremongering!" etc. in order to avoid a change in thinking and acting. Even studies that are based on proven effects that suggest such changes do not help. Here too, conventional medicine abandons its precious factual grounding - this one seems to be very disruptive in this case ...